For the first time in its history, the University of Georgia surpassed a half-billion dollars in research and development spending in fiscal year 2022. With total expenditures of $545.6 million — representing a jump of more than 10% from the previous year — UGA did not simply exceed the half-billion mark, it rocketed past it.

Fueled by strong increases in sponsored research funding from multiple federal agencies, the one-year jump of $51.7 million is UGA’s largest single-year increase in recent history and the first time since FY2017 that R&D expenditures have grown by more than 10% in a single year. 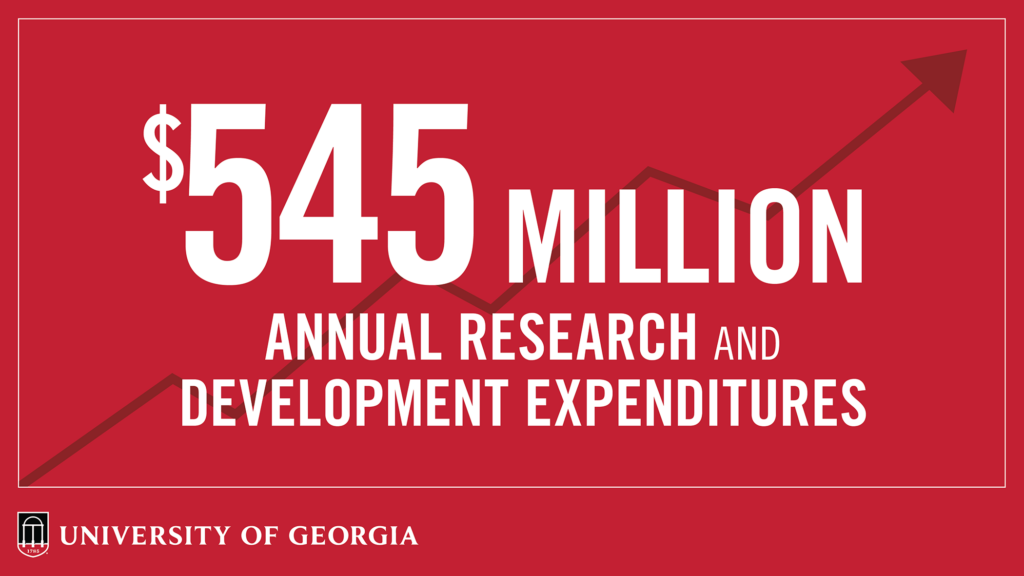 “I am incredibly proud of this accomplishment and the expansion of UGA’s positive impact that it represents,” said President Jere W. Morehead. “I am especially grateful for the support of our partners in industry and government, the generosity of private donors, and the extraordinary work of our faculty, which made it possible.”

Over the past nine years, UGA’s annual R&D expenditures have increased by nearly 58%. Both before and during that time, the university made strategic investments to expand its research infrastructure and recruit top research faculty with the ability to attract funding from both public and private sources. These efforts have paid off, as the details from FY2022 illustrate. Single-year sponsored research funding growth from key sources included:

“Reaching this milestone is a testament to our faculty and their innovative, cutting-edge research that promises solutions to some of the world’s most pressing challenges,” said S. Jack Hu, senior vice president for academic affairs and provost. “The University of Georgia has made a number of significant strategic investments designed to advance our research enterprise, and it is exciting to see the tremendous momentum generated by our efforts.” 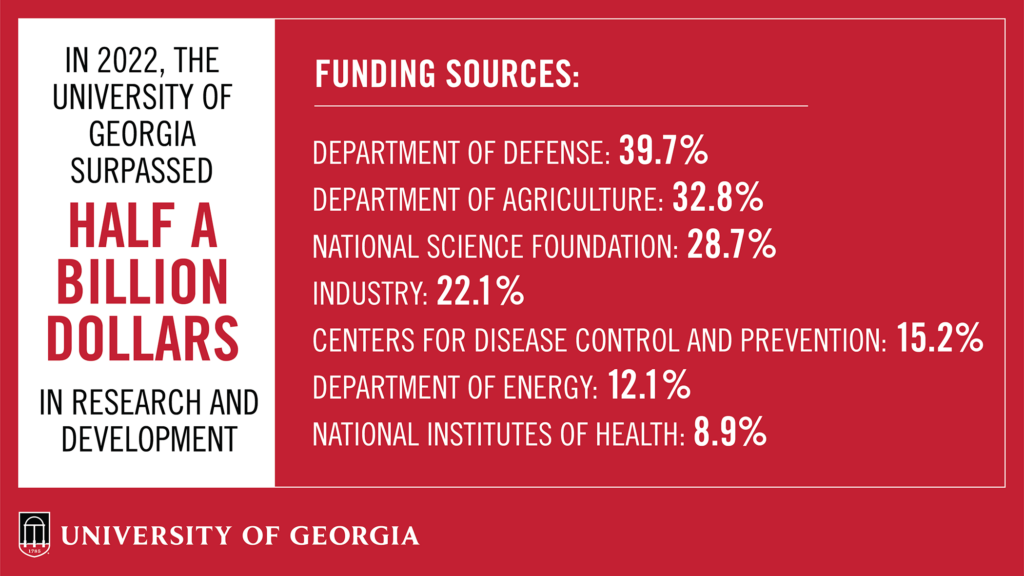 The university recently completed its Interdisciplinary STEM Research Complex, which added a total of 200,000 new square feet of research space to the campus footprint. A new Poultry Science Building is rising from the ground just northwest of I-STEM, and UGA is engaged in a decades-long plan to renovate the facilities on south campus’ “Science and Ag Hill,” updating buildings dedicated to a number of physical and life sciences in order to accommodate 21st century research technology and practices.

Buildings, however, don’t apply for research grants, and that’s where UGA faculty have been increasingly successful. In fall 2019, Hu launched a Task Force on Academic Excellence that examined the areas in which UGA’s research strengths were poised for excellence and likely to yield tangible benefits to Georgia and beyond. The group identified a small number of specific fields — including security (cyber, food, supply chain), environmental science, brain and behavioral health, and integrative precision agriculture — and UGA has since launched targeted hiring initiatives to bolster its research strengths in those areas.

For example, UGA recruited the inaugural John H. “Johnny” Isakson Chair and Georgia Research Alliance Eminent Scholar in Parkinson’s Research, Anumantha Kanthasamy, in 2021 following a $4.5 million fundraising campaign to endow the position. UGA then launched a new Center for Brain Science and Neurodegenerative Diseases, with Kanthasamy at the helm, and secured $5 million in federal funding for facilties and equipment to support the center.

Since arriving in Athens, Kanthasamy has continued to win significant funding to continue the advances he’s made in the fight against Parkinson’s, and the center itself is attracting a nucleus of both junior and senior faculty whose work promises to have wider impact for those who suffer from neurological disease.

Another example is Georgia Research Alliance Eminent Scholar Robin Buell, also a 2021 recruit, who works in plant genomics. Her team recently received a five-year, $15.8 million award from the U.S. Department of Energy to modify poplar trees for use as a sustainable energy source and to create other biomaterials and bioproducts that do not rely on petroleum.

UGA also invested in team science initiatives to support the pursuit of large-scale, multi-investigator grants. Spurred by the Presidential Interdisciplinary Seed Grant and Teaming for Interdisciplinary Research Pre-Seed programs, faculty across disciplines work to conduct initial research which is later funded by external grants. The Office of Research also strengthened its support for these multi-investigator projects through its Integrative Team Initiatives program.

Most recently, the university established the Office of Business Engagement to coordinate partnerships with industry, a key component of UGA’s Innovation District initiative.

“I’m so impressed by the faculty around UGA who continue to put in the creativity and meticulous work that’s required to apply for external research funding — and to enjoy ever greater success in securing that funding,” said Karen Burg, vice president for research. “These numbers demonstrate that the strategic investments UGA has made in our research enterprise continue to pay off, with society and the citizens of Georgia being the ultimate beneficiaries of the new knowledge, new products and technologies, and new health interventions that result.”

The university also recently learned that it now ranks 57th nationally in the National Science Foundation’s latest annual Higher Education Research and Development survey. This ranking is based on the university’s R&D expenditures in FY2021 of $493.9 million.